Ode to Les: Six Life Lessons My Mentor Taught Me 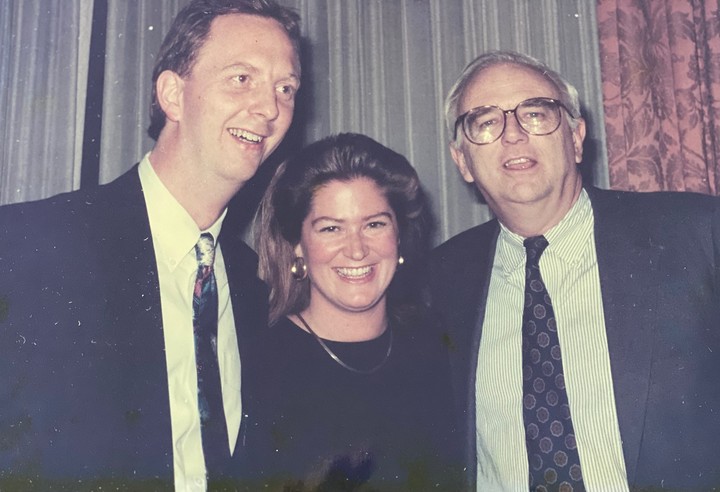 I got an out-of-the-blue email the other day from a couple of old friends and colleagues. They were looping me into a broader email thread of former Les Aspin staffers in honor of the twenty-fifth anniversary of Les’ death.

For those of you who don’t know, Aspin was former Secretary of Defense for President Clinton, wicked smart, and—whether he wanted to be or not—my mentor. I’ve learned some of life’s most valuable lessons from Les, many of which provided the foundation for my book, The Renaissance Campaign.

His death was one of those life-altering moments, but in the amorphous haze of time the pandemic has created, I had completely forgotten about the anniversary.

In any case, the group was recounting one hilarious story about Aspin after another. There was the time that he blew cigar smoke in my six-month-old baby’s face as, “she had to get used to it.” Or another, when a friend and boss of mine brought his baby to the office and Aspin essentially equated the baby with his dog. Or the time he called a staffer after her especially difficult time giving birth. She was delighted that he cared so much to call her, only for him to ask if she’d be in on Monday. Or how we could never bring him powdered donuts, as he’d go out to the press with powder everywhere.

But beyond these classic tales, what each and every one of us share is a sense of gratitude and respect for him.

Aspin was a Yale undergrad, an Oxford graduate, and had a PhD in economics from MIT. His intelligence matched his pedigree and he made us and the country better. He was a Congressman from southeastern WI with communities like Kenosha, Racine, Lake Geneva, Janesville, and Beloit making up his District. From the beginning of his time in Congress, he became laser-focused on national security issues, becoming the Chairman of the House Armed Services Committee (HASC), and later, President Clinton’s first Secretary of Defense in 1993, from which he was forced out a year later.

Like so many of my former colleagues, I had my own unique relationship with him. He was a huge influence in my life, and as I’ve said, my mentor, but as is the case with all of us, he wasn’t perfect. He could be brutal. He had blind spots that got him in trouble. He wasn’t particularly interested in any of our lives, and if you worked for him, you were simply an extension of him 24/7. No doubt my wife began to fully understand that when he called me three or four times on my honeymoon. In fairness, I did have the audacity to get married and have a baby during an election year.

Indeed, I often jested that Les had many of the same qualities as Miranda Priestly in The Devil Wears Prada. The scene where she describes why a very particular shade of blue was used in fashion was very Aspin-esque to me. I suspect part of the reason so many liked him was because of his relatability that those imperfections inspired. But beyond liking him, he taught us things. I’m now a couple of years older than Les was when he died and am deeply appreciative of these many lessons. While Les is gone, his lessons are not, and just as they’ve changed my life, they can continue impacting people for years to come. Here are a few that have stuck with me over the years that I find myself using or trying to use virtually every day.

1. Be curious. Les had an insatiable intellectual appetite he used all the time. I remember being grilled by Les at one of our legendary half-day Sunday staff meetings early on in my tenure. After seeing my temper rise over the constant questioning, he said, “Don’t get mad John; I was just curious.” Stuck with me forever.

2. It takes constant vigilance. Les’ success and impact were because he was so disciplined and vigilant. I try to bring this discipline and vigilance to the table every day.

3. Don’t hold a grudge. Les took very little personally. He wasn’t the guy to get back at someone. I never saw him do it. Even after he was fired as SECDEF, he never publicly, and very rarely privately, spoke poorly of the President.

4. Have a plan. As Ted Bornstein, Les’ ole chief of staff and my direct boss, reminded me, Les made us write out nine different campaign plans one year before finally agreeing on one. Once we did, he was fully behind us. His contention was that we had to have the fundamentals down because there’d be plenty of curve balls thrown at us, and by having a plan, the majority of the campaign could operate on autopilot (with constant vigilance).

5. Be tough, have grit, work hard. We all worked really hard. Really, really hard. But Aspin worked harder. He was always there, always working. It was his passion and purpose in life. I didn’t know how lucky I was when I first got the job with Les as his Ombudsman (District Director)—the lessons that’d stay with me for the rest of my life, and what amazing people I’d work with. The Aspin staff was a great team, no doubt made greater by the years that have gone by that have clouded whatever petty spats we had at the time.

6. I often say that Les taught me as much in death as in life. Les had no balance and when he was ousted as SECDEF, there were many in the Aspin family who thought it figuratively killed him. As one of my old colleagues said, he died of a broken heart. All he wanted to do was serve and be in the middle of the mix of the most complex and important issues of the day. When he was out of the game, it broke his heart. As a result of this, I vowed that I’d strive for balance and, for better or for worse, have made numerous life decisions along the way reflecting that.

Les Aspin was a force of nature. I’m so grateful for all his lessons in life and death. So with that in mind, thank you Les, and thank you to the Aspin family. I am a better man because you were in my life.